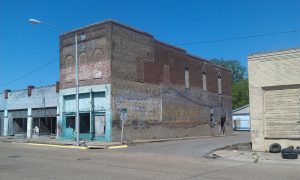 Located in the Wynne Historic Commercial District, the two-story brick building known as the Wynne Opera House has served a variety of purposes for over a century in the seat of Cross County. The building was constructed about 1900 as a grocery on the first floor and an opera house above. By 1903, the first floor was vacant  but the “opera hall” was thriving. The building later served as a temporary courthouse for Cross County and later a hardware store and tin shop. A record of those uses remains painted on the side in “ghost signs”. For the last 40 years, very little has been done to the building. Because of the lack of updates, the building retains a good amount of historic character and integrity. However, because the building is open to the elements, it is quickly deteriorating and there is a concern that if the building is not stabilized, it will be lost.