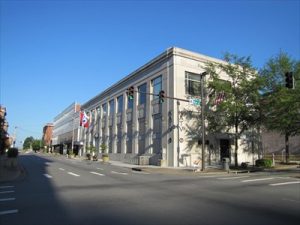 In 1928, Little Rock’s long-established Worthen Bank moved into its imposing new home at the corner of Main and Fourth Streets in downtown Little Rock. To design the new building, Worthen directors turned to one of Arkansas’s most respected and best-known architects, George R. Mann, known for his work on the Arkansas Capitol Building and the Hotel Pines in Pine Bluff. Since 1969 it has been the home of television station KATV. It has been modified internally but the exterior retains almost all of its historic elements. In 2015, the Worthen/KATV Building was listed as a “Property to Watch” and its future remains unclear. As of 2016, KATV has announced plans to move and the building will be offered for sale. As of 2020, that move and sale have not occured yet but the building’s future is still uncertain.