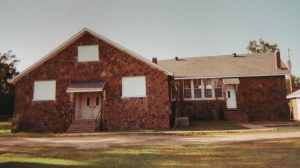 In the years after the American Civil War, significant numbers of African Americans migrated to Conway County and established several small communities. Union Chapel was one of these, located on the outskirts of Springfield. Union Chapel lasted; one indication of this was the construction, in the late 1920s, of a stone-clad, three teacher school with adjacent shop or trades education buildings, supported by the Rosenwald foundation. When the Rosenwald School burned in the mid-1930s, a new one was erected by the WPA on the same footprint during 1937-1938. The school was built of local rock, the workers supervised by a reputable local mason. It served the children of Union Chapel until 1970, when they were transferred to a more modern facility. The former school, now called Union Chapel Community Center, was deeded to the community in 1970. For many years, it hosed annual picnics, basketball games, fish frys and a host of other functions. In recent years, however, the buildings have fallen into disuse and disrepair. The WPA-built school and pump house walls, plus those of the original Rosenwald-funded shop, remain in fair condition but ceilings and floors have perilously sagged. The community does not have the funds to repair on its own. It was added to the National Register of Historic Places in 2016.