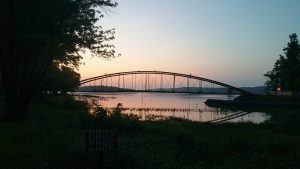 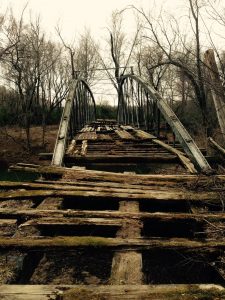 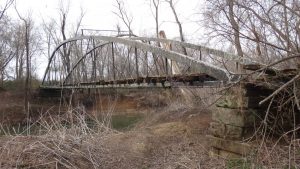 The Springfield Bridge was built in 1874 by the King Bridge Manufactory and Iron Works of Iola, Kansas. It was shipped disassembled, then erected on footings built by a local mason. The bridge was an essential link in an historic route connecting Des Arc on the White River with Springfield, the onetime seat of Conway County. The Springfield Bridge is a good example of the now-rare bowstring truss design, as well as the oldest surviving highway bridge in the state. The road was relocated in 1991 and the bridge was bypassed. After that, the bridge was allowed to deteriorate; the stonework failed and vandals set fire to the bridge timbers in 2013. In 2016, the Faulkner County Historical Society took on the bridge as a project and was able to move the bridge from its original location to Lake Beaverfork in Conway, to be used as a pedestrian walking bridge. In 2017, the bridge was opened to the public as a walking bridge and part of a trail system managed by the City of Conway at Lake Beaverfork.