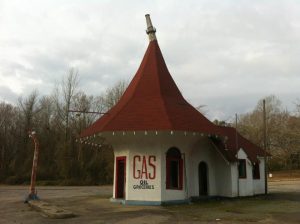 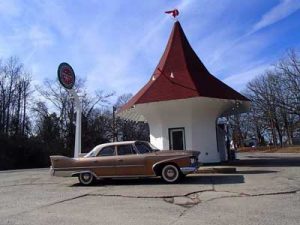 The Roundtop Filling Station, also known as Happy’s Service Station, was built in 1936 by the Justin Matthews Company for the Pierce Oil Company. Pierce Oil was one of the “baby Standards” formed after the breakup of the Standard Oil Company in 1911. In 1936, Pierce Oil contracted the Justin Matthews Company, a large developer in North Little Rock, to construct a uniquely shaped gas station along US Highway 67. W.D. “Happy” Williford was the operator of the station from its inception and eventually purchased it from the Sinclair Oil Company in 1955. The station closed in 1981 when Williford retired. In January 2015, after a restoration by the City of Sherwood, the Roundtop Filling Station was reopened as a police substation for the City of Sherwood.