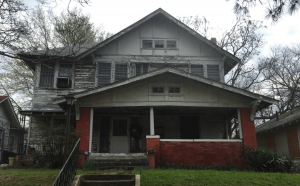 The Ray House, located on Cross Street in the Dunbar Historic District, was the home of Harvey C. and Mary Ray, the first two African American professional employees of the Arkansas Agricultural Extension Service. They moved into the house in 1917, the year it was built in a district that would be home to many other African American middle class and professional families. Harvey Ray worked with farmers to grow and manage their operations; Mary Ray was a Home Demonstration Agent, teaching women and girls across the state. After Mary Ray’s death in 1934, Harvey Ray remarried, this time to another Home Demonstration teacher, Julia Miller. They raised three children in the home; one of them, Gloria, would win fame in 1957 and after as one of the Little Rock Nine. This house, the largest on its block and rich with associations, stands vacant and neglected. It is besieged by demolitions; two adjacent houses have already been torn down, with others vacant and endangered.

As of January 2020, the home has been sold and the new owners plan to renovate the Ray House.