Built ca. 1930 to serve as a jail, the Old Jail Log Cabin was part of Lafayette County’s first county seat, a 43-acre site at Chickaninny Prairie, ten miles southwest of present-day Lewisville on the Red River. The county’s second courthouse was built in 1841 at Lewisville, moving away from the river. In the late 19th century when a railroad line was built south of Lewisville, the town grew that direction to be near the railroad, prompting the construction of yet another courthouse. In 1968 the Old Jail Log Cabin was moved to the grounds of the Lafayette County Courthouse, where the Lafayette County Historical Society did some restoration work to the cabin. The single-pen log building was moved again in 2009 to the its present site at the Lafayette County Conservation District office on Highway 82. The cabin features original square head nails, mud chinking and hand hewn oak timbers. The roof is failing, although a large tarp now covers the hole in the roof. 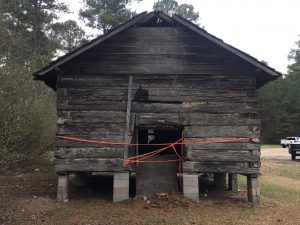 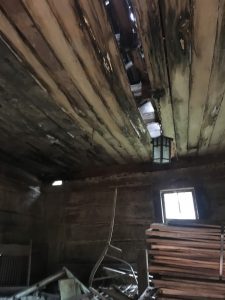 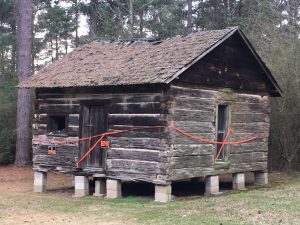