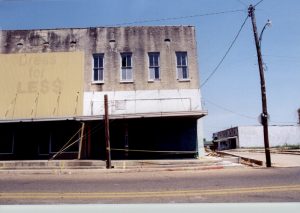 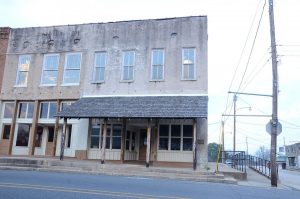 The second story of this building has a separate history all its own. On December 18, 1885, E.M. Lodge No.363 officially occupied their new hall on the second floor of the Nutt Building. Lodge No.363 met here almost continually until the organization built a new building in 1960. The meeting hall still has many of its original furnishings, such as the platforms located around the room, the stage, remnants of the checkerboard floor, and a few remaining panes of the snowflake glass windows. In 1916, the building was bought by L.L. Trussell to house his new business, “The People’s Store”. This was a simple business that catered to its customers with a line of general merchandise of good quality and affordable prices. The store routinely operated long hours each day with the exception of Sunday. During the cold winter days, Mr. Trussell was known to open his store as early as 5am selling gloves, boots, and hats to accommodate the early shift workers en route to the Fordyce Lumber Company. The People’s Store was an important fixture in the Fordyce economy for many years until it closed in the sixties.