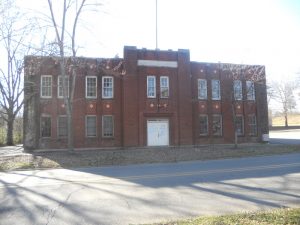 The Clarksville Armory, also known as the Sonny Alston Youth Center, is on hand a workaday building built with stylish design touches suggestive of its era of origin and on the other, a public space whose original martial mission has given way to civilian pursuits. Its present-day name memorializes a prominent member of the local African American community – a city employee who was a booster of community youth sports programs. Like many of its kind, the former Clarksville Armory has suffered from aging and maintenance issues. Cost estimates for rehabbing it to serve as a city maintenance building have run higher than some city council members are comfortable with. Reluctance to pursue grants for rehab is based on concerns over responsibility for long term maintenance if the grants are awarded. Since the time of its nomination to the Most Endangered Places list, Preserve Arkansas worked with local city officials to sell the building to the nearby University of the Ozarks, who plan to renovate the building and use as part of a larger trail system that runs adjacent to the university.