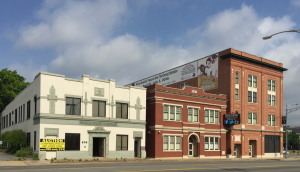 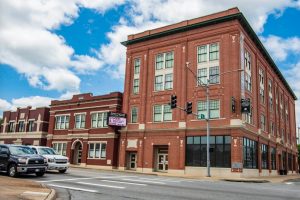 In the last decades of the 19th century, the Mosaic Templars of America, an African American fraternal order, was established in Little Rock by a visionary group of businessmen. In 1911-1913, the MTA built its imposing headquarters at the corner of 9th and Broadway; soon after, in 1918, the Templars constructed an adjacent infirmary and nurses’ college, and in, in 1921, a separate headquarters for the state-level Temple of the now nationwide organization. Of these three buildings, two have been destroyed by fire and reconstructed; only the Mosaic State Temple remains, its original fabric and exterior decoration mostly intact although much modified on the interior. It has served many tenants since the MTA’s dwindling in the 1930s. In 2016 it was placed for auction. After much advocacy and negotiation, it was purchased by the State of Arkansas and renovated for use by the Mosaic Templars Cultural Center, a museum of the Division of Arkansas Heritage. The State Temple building was also listed on the National Register of Historic Place in 2018.