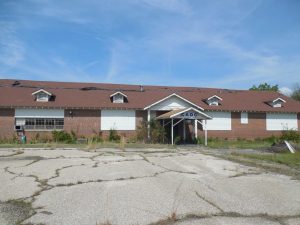 Built in 1929, the Malvern Rosenwald School is significant for its association with African American education in Malvern and is the only remaining Rosenwald school in Hot Spring County. During the early 20th century, Sears and Roebuck president Julius Rosenwald provided grants for the construction of African American schools throughout the southeastern United States through the Rosenwald Fund. Out of nearly 400 Rosenwald buildings in Arkansas, fewer than 20 remain standing today. The Malvern Rosenwald School was constructed at a cost of $18,450. The Rosenwald Fund contributed $2,100 towards the school’s construction and the remainder came from public funds and contributions from the local Black community. The school initially houses grades one through nine, but as high school grades were added to the school, additional space was required, leading to the construction of two additions. The school served all of Malvern’s Black students until 1952, when the A. A. Wilson High School was built. The Rosenwald School then became Tuggle Elementary School after beloved teacher Sophronia Tuggle. After integration came to Malvern in the late 1960s, Tuggle Elementary housed a Head Start program, then later the Central Arkansas Development Council. However, it has been vacant for several years now and deferred maintenance has taken its toll.