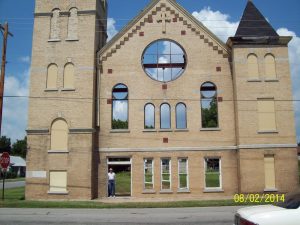 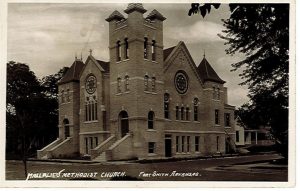 The Mallalieu Methodist Episcopal Church was established in the late 1800s as an African American congregation of the local Methodist Church. The existing building was built in 1921 and served the congregation until the late 1980s when it relocated. The building has been vacant, neglected, and damaged by the elements since then. The stained glass windows were sold to an out of state collector, making it ineligible for listing in the National Register of Historic Places. The Howard Foundation is a 501 (c)3 organization that was started to raise funds for the building’s rehabilitation. The foundation’s long-term goal is to develop the Mallalieu building to provide a place where the underserved youth on the north side of Fort Smith can benefit from physical activities, personal mentoring, encouragement, and opportunities to communicate with educated people around the world. As of 2014, the rear of the building had been completely destroyed, leaving only the front facade standing with bracing support.