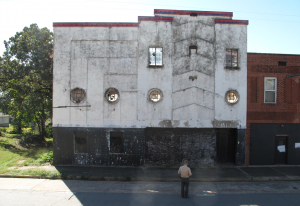 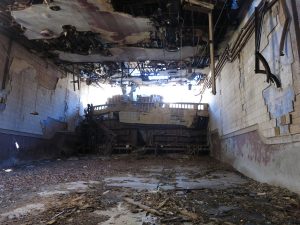 The Lee Theater is a one-screen movie theater built in 1940, replacing an earlier, smaller theater on the same site. The shell was built of hollow tile and brick. Its Deco-influenced facade featured white stucco, glazed tile and three colored porcelain enamel copings. Inside, the hall was finished with simple metal trim and five shades of blue paint. The theater originally held 700 guests on the first floor and 200 in a segregated balcony. Its box office was designed so that white and black patrons would not have contact with one another. In 1949, there were nineteen “stand alone” movie theaters and two drive-ins in Little Rock and North Little Rock. Today, the Lee is one of three former theaters remaining and the only one built before World War II.