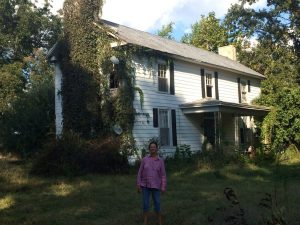 During the early 1840s, Tennessean James Horn Williams visited today’s Mississippi County, scouting properties on behalf of his planter father. What he saw apparently pleased him; in 1849 he purchased 480 acres on which he built a residence. Williams  became one of the leaders in the area; he served in both the House and Senate, was a justice of the peace and very active in local school, church and Masonic activities. The present house is believed to incorporate Williams’ original modest plantation house, much enlarged and modified and described in 1880 as “a fine residence”. The house remained in the Williams family hands until 1923 when it was sold to the Howards, another local family. They continuously occupied the home until 2014. It is currently unoccupied and falling into disrepair.