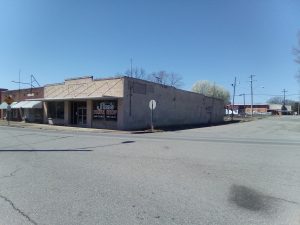 The Henry Brothers Store was built in 1925 and faced the railroad tracks in downtown Jacksonville. The building was designed in the early 20th century commercial style with a raised central parapet and a name plate reading “Henry Bros. 1925”. It is the oldest building in the National Register-listed Jacksonville Commercial Historic District, which includes the most intact portion of the city’s historic commercial core. The Henry Bros. Store was constructed and operated by M. J. Henry and his sons, Alonzo, M. L. and E. A. Henry. The building later housed Garvin’s General Store, Pace’s Department Store and Carlisle Department Store. At present, the Henry Bros. Store is not in use and the roof is failing.