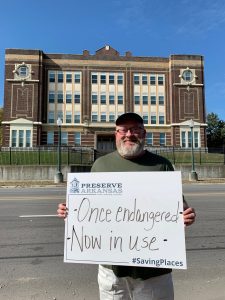 Helena High School was built in 1912 at 313 S. Briscoe Street, the site of the old General Hindman home. The first class graduated in 1913. Vacated in 1972 and now in poor condition, the building is owned by the Helena/West Helena School District, the building was used for storage for several years. Proponents of historic preservation envision the building being put into service as condominiums, apartments, or a community resource center. The old school building is one of the most monumental and lavishly detailed early neo-Classicism buildings in Helena. The facade of its simple rectangular structure is enlivened with patterns of tan and red bricks and terra cotta cartouches containing round windows at both corners of the top story. The simple, rather recessed entry is outlined with egg and dart terra cotta molding. The building has been completely renovated and now serves as low income housing.