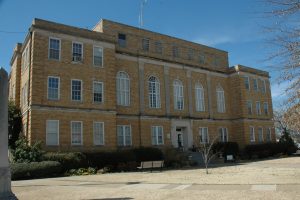 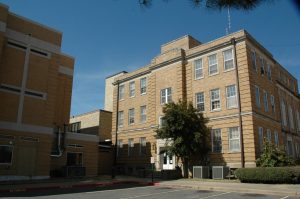 When the first courthouse burned down in 1893 it was replaced by another on the same site. This building was constructed by George W. Donaghey. The Donaghey courthouse was torn down and replaced in 1935 with today’s Works Progress Administration (WPA) funded structure built by Little Rock architectural firm, Wittenburg and Deloney. This courthouse was designed to hold the county offices and a jail on the top (third) floor.

In 1995, the Faulkner County Courthouse was listed on the National Register of |Historic Places for its architectural style, noted to be the finest example in the county of this unusual combination of the Colonial Revival and Art Deco styles and for its historic significance as local landmark and one of the oldest public buildings in Conway and in Faulkner County.

In the summer of 2008, the County government began to assess the need for repairs to the building, citing lack of space and outdated building systems. One evaluation of renovations concluded that the cost of rehabilitation would be more expensive than building a new courthouse, sparking discussion among County officials and in the local media about demolishing the courthouse.  The Faulkner County Quorum Court pursued revocation of the conservation easement that was donated to the Arkansas Historic Preservation Program by the county upon receipt of a County Courthouse grant in the mid 1990s.  The future plans of the Faulkner County government are still undecided and without an easement in place to protect the building, the concern is that the courthouse may be lost.