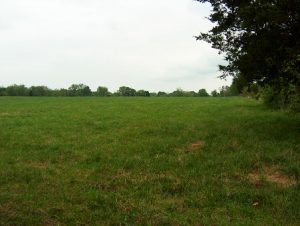 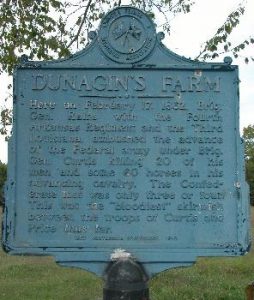 The Pea Ridge campaign was arguably the most significant campaign of the Civil War in the TransMississippi region. The Union Army of the Southwest under Brigadier General Samuel Ryan Curtis defeated the Confederate Army of the West led by Major General Earl Van Dorn in the Battle of Pea Ridge (Benton County) on March 7–8, 1862, and played a pivotal role in claiming Missouri for the Union and opening Arkansas to Union occupation.

As Confederate Missouri State Guard troops were being run out of Missouri by Union Troops, this was where the Confederate troops in Arkansas took up the rear and defended the Missouri State Guard so that they would not be destroyed. They had been on the run for 3 days in horrible Ozark winter weather with little or not food or shelter. Curtis’s Army of the Southwest rolled forward with little opposition until encountering the Confederate line located just south of Little Sugar Creek along the southern edge of a large field belonging to a farmer named James Dunagin.

This was the precursor to the battle of Pea Ridge which may not have even happened if the Missouri State Guard had not been protected from Union troops by the Confederate Army of Arkansas, Louisiana and Texas. This battle happened on February 17th, 1862 and is also called the Battle of Little Sugar Creek. The fighting lasted an hour and resulted in about 40 casualties.

The site is privately owned and is currently for sale. The property is not protected from the removal of artifacts or development from nearby Fayetteville and Rogers areas. The National Park Service has studied adding Dunagin’s Farm to the Pea Ridge Military Park, but has been unable to negotiate the purchase of the property. Christine Ashlock, an advocate for the preservation of Dunagin’s Farm, speaks to groups about the importance of the site and maintains a Facebook page “Save Dunagin’s Farm Civil War Battlefield” to increase visibility. Advocates continue to enlist support from related organizations, including the Civil War Preservation Trust the Arkansas Civil War Sesquicentennial Commission, the Benton County Historical Preservation Commission.

Dates to: 1862. Site of the first important Civil War battle fought on Arkansas soil and part of the Pea Ridge campaign Threat: Lack of protection from development and removal of artifacts related to the Civil War battle