In recent years, the decline of the historic commercial district of Pine Bluff has attracted attention in historic preservation circles and the public eye. The recent literal collapse of several buildings in the onetime business blocks has highlighted the dire condition of much of the heart of what was once a vital center of industry, trade and society. 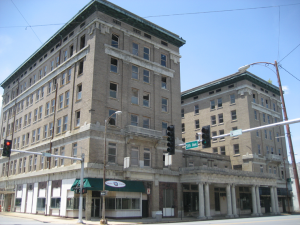 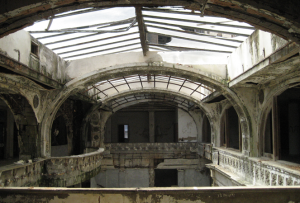 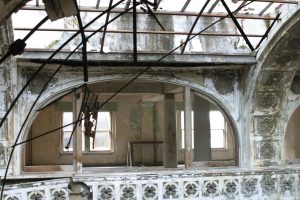 The Hotel Pines, built in 1912, was the largest and finest hotel in Pine Bluff and the center of the city’s social life for over 50 years. It was designed by George R. Mann, the first architect of the Arkansas Capitol; it is a six-story U -shaped brick building with classical ornamentation outside and a rich interior featuring marble and stained glass. The Hotel Pines operated continuously for fifty-seven years. When passenger rail service to Pine Bluff ended in 1968, the hotel lost its primary clientele, closing in the spring of 1970. The 1990s and again the 2000s saw attempts to rehabilitate it, but today it stands vacant. Plans to rehabilitate are underway, but lack necessary funding and support to save it is dwindling. 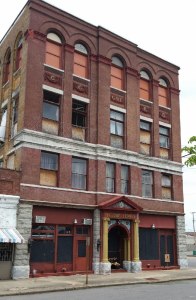 Pine Bluff’s African American Masonic Temple was begun in 1902 and, when it was completed two years later, stood as the largest building in downtown Pine Bluff. The exterior of the building is largely intact, apart from a dormer destroyed in a 1954 fire and not rebuilt. Many businesses operated from the structure, including Arkansas’s first African American owned financial institution. The building’s original cornerstone is a “Who’s Who” of Arkansas’s most notable African American citizens.