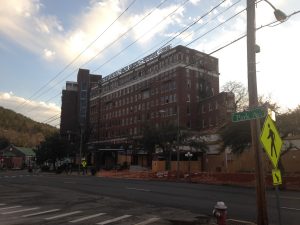 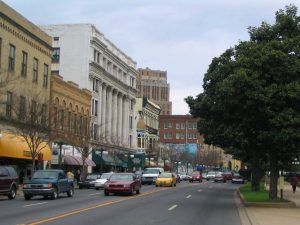 On February 27, 2014, a fire broke out in the oldest section of the Majestic Hotel, a long-shuttered landmark that anchored the northern tip of Hot Springs’s Central Avenue Historic District. The fire at the Majestic Hotel called statewide attention to the plight of many prominent historic buildings in downtown Hot Springs and spurred the creation of a downtown task force, a series of public hearings and much discussion about the future of this landmark district at the center of Arkansas’s tourism economy. Unfortunately, it was decided in 2016 that the Majestic Hotel would be demolished and it was torn down.

Despite the successful rejuvenation of the National Park-owned buildings along the east side’s Bathhouse Row, redevelopment along the west side of Central Avenue has been slow and spotty. Until recently, city ordinance allowed and even provided incentive for property owners to leave the upper stories above Central Avenue storefronts vacant. As long as the downtown buildings remain vacant and unsecured, the threats of further deterioration, vandalism and fire remain critical.