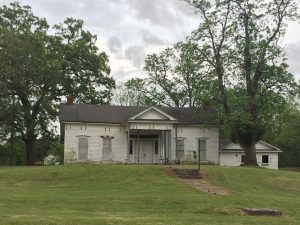 The Cox-Burrow House is an ell shaped Greek Revival house built by Colonel Handsel Wesley Burrow, a farmer and early resident of Lewisburg, a river town and the thriving seat of Conway County. In 1871, the widowed Burrow remarried and built this graceful house on a five acre parcel on the north edge of Lewisburg. Burrow died in 1887; he had raised five children in the house, three of whom grew to adulthood. He had seen the decline of Lewisburg, supplanted by Morrilton as county seat due to the advent of the railroad. In 1974, the house was listed on the National Register of Historic Places; at the time it was owned by the Cox family who used it as a school house. In the National Register listing, the nominator described it as “one of the last remaining links between Morrilton and the parent community of old Lewisburg”. Sadly, the house was demolished by its owners in the spring of 2016, illustrating the fragility of Arkansas’s historic resources.