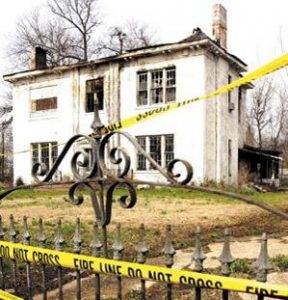 The Bell-Robinson-Triplett Mansion was built in 1852 in the Federal style and was a wedding gift from Judge Samuel Calhoun Roane to his daughter who married Marcus Lafayette Bell on December 19, 1852. The house was Pine Bluff’s first brick mansion and was central to the social life in Pine Bluff before and after the Civil War.

During the Battle of Pine Bluff in October 1863 a cannonball fired from the Union defense near the courthouse went through a second story window and rolled across the floor. The cannonball
compromised the structure and a metal rod was later installed in the attic to stabilize the building. After the battle, the victorious Union troops looked to the Bell Mansion as a place to establish headquarters. According to local history, the troops were spurned by the lady of the house who wrapped a servant child in bandages and informed the men they were welcome to come in if they were not afraid of
smallpox.

Unfortunately, the Bell Robinson Triplett Mansion was demolished by the City of Pine Bluff after this nomination and was delisted from the National Register of Historic Places.