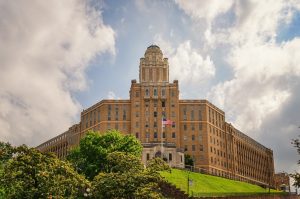 Located on Hot Spring Mountain overlooking downtown Hot Springs, the nationally significant Army and Navy General Hospital Historic District contains about 30 buildings dating from 1908 to the mid 1970s. This complex began its existence in 1887 as the nation’s first combined general hospital for both U.S. Army and Navy patients. The Army and Navy Hospital was also the first such facility established during peace-time and the only military hospital situated solely because of its proximity to hot springs. The facility was well-known for its work treating arthritis and polio through hydrotherapy. The present Spanish Revival-style General Hospital Building was completed in 1933 to replace the 1880s hospital and accommodated 500 patient beds in 210,000 square feet. The Army and Navy Hospital provided vital medical care to soldiers returning from World War II, admitting nearly 15,000 patients from 1941 to 1945. In 1952, the military announced its plan to close the Army and Navy Hospital. On April 1, 1960, the Secretary of the Army gifted the hospital complex to the State of Arkansas for use as the Hot Springs Rehabilitation Center, a residential rehabilitation facility for people with disabilities. The State of Arkansas announced plans in May 2019 to close the rehabilitation facility, then called the Arkansas Career Training Institute. The complex housed patients until September 2019. It is currently vacant.