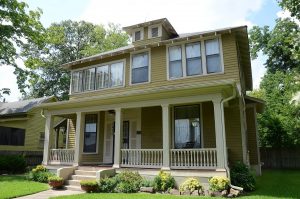 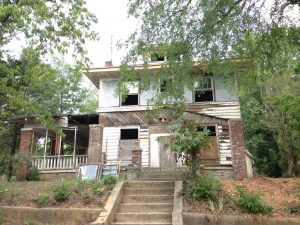 The Wright Avenue Neighborhood and the Central High School Historic District contain a wide variety of examples of architectural styles. Chief among these is the American Foursquare, a subtype of the Prairie style that was popular from the mid-1890s through the late 1930s, which incorporated handcrafted woodwork and a floor plan typically consisting of four rooms per floor. Many of the American Foursquares in this area of Little Rock was established circa 1913 as part of a tract development supervised by the Holman Real Estate Company. In 1999, the Arkansas Historic Preservation Program published a volume in which the 2300 block of South Summit Street was commended for its “exemplary versions” of the American Foursquare. This comes as no surprise as 11 of the 30 contributing Foursquares in the district is located on this block of South Summit St, and this particular street is the only street in Little Rock, and perhaps Arkansas, that is comprised exclusively of Foursquares. Like many historic homes in central Arkansas, these homes have fallen victim to neglect and the ravages of time and absentee ownership. At the current time, 64% of the Foursquares on the 2300 block of South Summit Street sit vacant or abandoned. The great irony is that these homes sit endangered on the very block where they are most “exemplary”. The loss of these significant houses would be detrimental to the community revitalization efforts in these neighborhoods. New tools such as the Little Rock Land Bank Commission may help secure the future of abandoned houses like these, but time is running out. A greater understanding of the importance of historic buildings is needed to allow these tools to function for the benefit of our state’s historic resources.