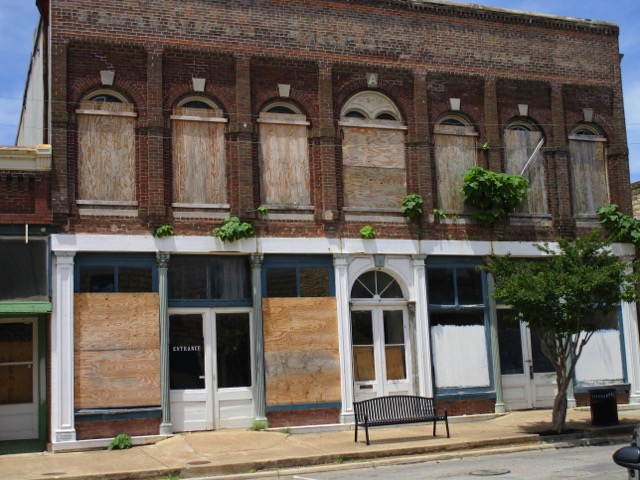 Built in 1881 By Jewish merchant Simon Adler, the Adler Building is one of the largest commercial structures on Main Street. When the Adler Building opened, it housed two businesses on the ground floor, with offices and a large auditorium and dance floor upstairs. After Simon Adler’s death in 1904, his son, Nathan, continued the Adler business in half of the downstairs space, with other Jewish merchants operating in the remainder of that level. The Federal Court operated on the second floor auditorium area until 1916, when Nathan Adler sold the building to Yeatman-Gray Grocery Co., a wholesaling company. In 1931, Yeatman-Gray declared bankruptcy, and the Barnett family bought the building and created Arkansas Dry Goods, another wholesaling concern. The Barnett’s owned the building long after the business closed, but it has subsequently passed through several hands, with little or no maintenance. For some time, the building has exhibited signs of neglect, with serious leaks in the roof, missing window glass and rotting window sashes and frames. In February 2018, two-thirds of the back wall collapsed, leaving the interior open to the elements. The building is vacant and in poor condition.