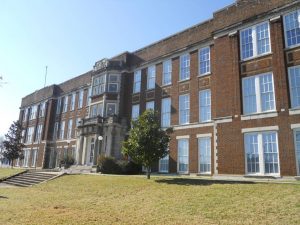 West Side Junior High School at 1300 Marshall Street in Little Rock is an example of a fine structure left largely to the forces of nature and vandalism. The building was designed by Theo Sanders in 1917 and built in 2 phases. It is a three-story classical building that fills the entire block between 13th and 14th Streets and Marshall and Wolfe Streets. The entrance bay facing Marshall Street is defined by an entablature, pilasters and a pair of Tuscan columns flanking a set of double doors with transom. Not only is this building important for its history and architecture, but this school building and many like it across Arkansas also contributes to the stability of its neighborhood when it is functioning in its intended role of public space and architecture. When left to decay, the structure cannot function in these ways and is a serious detraction from the neighborhood. In 2002, the Arc Arkansas purchased the building and begun a multi million dollar restoration. Today it functions as low income housing, office space and a children’s medical clinic for nearby Arkansas Children’s Hospital.