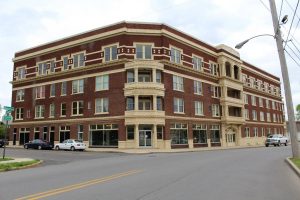 The Woodmen of Union Building in Hot Springs was erected in 1923 along the length of Malvern Avenue, between Gulpha and Garden Streets. On January 21, 1924, African American men from every region of Arkansas participated in the dedication of the Woodmen of Union Building. Created by John Lee Webb, Supreme Custodian of the Woodmen of Union, the unique building housed various activities of the fraternity. A 100-bed hospital and nurse training school, a 75-room bath hotel, the Woodmen of Union Bank, a 2,500 seat auditorium, an electronically operated printing plant, and executive offices were all located within the building. In 1950, the building was purchased by the National Baptist Association, U.S.A. and became known as the National Baptist Hotel and Bath House. The NBA expanded the bathhouse and upgraded the bath facilities according to the regulations of the United States Department of Interior. The bathhouse was finished with an abundance of nickel-plated brass and marble. In 1971, the NBA purchased the land directly behind the hotel to use for a parking lot. As segregation ended and integration of public facilities became prevalent, usage of the National Baptist Hotel waned in the late seventies and finally, in 1981, the
hotel closed. In the early 2000s the building was purchased for renovation into low income elderly housing. It is currently occupied as apartments for low income seniors. Many of the original features were restored and retained.