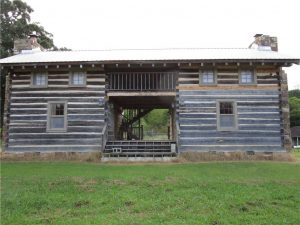 This two-story log house was built by Dr. Stephen Chism in 1845. Dr. Chism married Jeanetta Logan, daughter of James Logan, for whom Logan County was named. Mrs. Chism and 2 children died before the Civil War and are buried nearby the home. The Chism family occupied the house until the time of the Civil War when Dr. Chism moved to Roseville. Ben Chism, son of Dr. Chism, served as Secretary of State for the state of Arkansas in the post-Civil War period. Throughout the years, the house was occupied by various families; however, the house has not been occupied for perhaps 50 years. The house is perhaps the oldest structure in Logan County and is a wonderful example of pioneer architecture. The structure of the house remains much the same as when originally built. The floor is stone. Throughout the years, minor alterations have been made. The house was originally a dogtrot style. At some point, the dogtrot was enclosed by wooden planking. In 2009, the home was purchased and a full restoration was begun, using traditional log restoration methods. Today the home is privately owned.