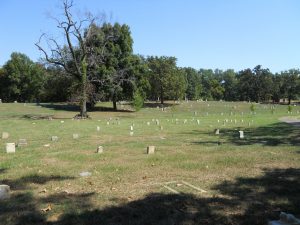 Located at 21st and Barber Streets in Little Rock, on land that was purchased by the City in 1863, Fraternal Cemetery was created in the late 1880s at the request of several black fraternal organizations, including the Knights of Tabor and the Mosaic Templars– hence, the name “Fraternal Cemetery.”

Much as Mount Holly Cemetery became the final resting place of distinguished white residents of Little Rock, Fraternal Cemetery saw the burials of distinguished members of the black community that had grown and prospered in Little Rock following the Civil War. Visiting Fraternal Cemetery today is to encounter a veritable “Who’s Who” of that community. The Ishes, renowned educators; John Bush and Chester Keatts, co-founders of the Mosaic Templars of America; Dr. J. M. Robinson; attorney Mifflin W. Gibbs– these are just a few of the prominent African-Americans who are laid to rest in Fraternal Cemetery. In addition to its important historical associations, Fraternal Cemetery is significant for its funereal statuary– again, much like Mount Holly.

Unlike Mount Holly, however, Fraternal Cemetery has received little public attention. As the city sold off portions of the original 14-acre site, the cemetery became “wedged in” between Booker Elementary School, Mann Middle School, and a strip shopping center. A storage lot for school buses borders the cemetery’s northern edge. Unfortunately, these surroundings make Fraternal Cemetery an easy target for vandals.

Finding ways to raise awareness of the cemetery’s significance, along with methods to prevent vandalism and restore damaged headstones, are the goals of the Most Endangered listing.