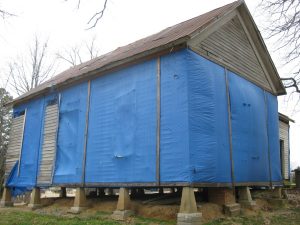 The New Hope School is one of the very few two-room schools existing in Eastern Arkansas. It is an excellent example of the small, rural schools which were once vital to Arkansas’s education system. The building was first built in 1903 as a one-room school house and was expanded to two rooms prior to 1930. School was held in the building for nearly half a century before consolidation moved the last class to Wynne. The New Hope School is located outside of Wynne, situated on top of Crowley’s Ridge, a unique geographic feature along the side of Eastern Arkansas. Thanks to the hard work of volunteers, the building’s concrete piers have been leveled, the interior braced and the exterior wrapped in tarps to stabilize the building, but the old school is still extremely vulnerable to high winds and the elements.  After an extensive renovation, the building was reopened to the public as a visitor center and museum in 2017. 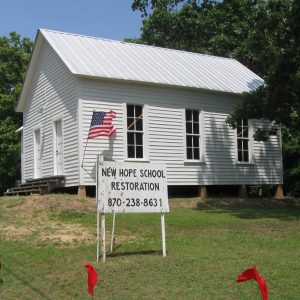