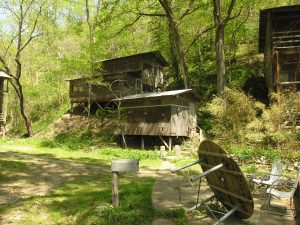 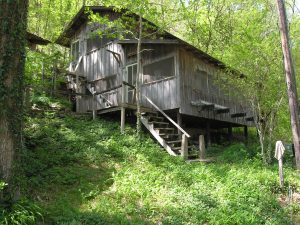 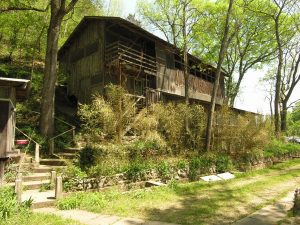 Gypsy Camp in the Siloam Springs vicinity was started as an artist colony in 1921. By 1924, it had become a camp for girls aged 8-17. The founder, Weezie McAllister, was an artist who taught at the University of Tulsa and local schools in the Siloam Springs area. The camp continued as a summer camp until 1978. The camp buildings, constructed between 1921 and 1928, reflect a rustic style associated with camps and park buildings from the era. The property was listed as a National Register Historic District in 1988, pursued by local citizens in the face of condemnation and demolition by the city. The 60+ acre property also includes several large protective bluffs and
caves that hold archaeological significance as a Native American pre-historical site. The Gypsy Camp is endangered due to the large size of the property and the prohibitive cost to maintain it. Additionally, this corner of Arkansas has seen exponential growth in development over the past
several decades. The increasing unchecked development and suburban sprawl create enormous pressure on the Gypsy Camp and many other similar largely undeveloped sites located in or adjacent to residential areas. Gypsy Camp is a significant site in its own right, but it also tells the tale of many other sites like it facing the threat of overdevelopment and suburban sprawl across Arkansas.