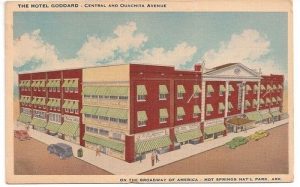 Since the early 20th century, the Goddard Hotel had anchored the southern end of Hot Springs’ downtown commercial district. The hotel was situated in a prominent location, just where Ouachita Avenue splits off of Central Avenue, the main thoroughfare through the city. In that location, the hotel was an imposing presence; its three stories enclosed 54,000 square feet of space. A red-brick building, the hotel was architecturally distinguished by a neoclassical pediment that faces Central Avenue. Despite its prominent location and imposing scale, the Goddard Hotel eventually fell into disrepair and had been vacant for more than two decades. Rehabilitation plans announced in the late 1990s did not materialize, and the building’s condition had steadily deteriorated. One wing now had been opened to the elements following the collapse of a section of the roof.