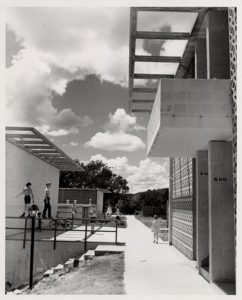 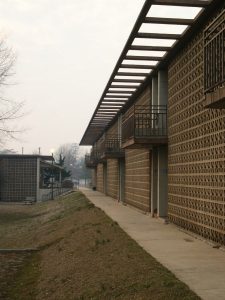 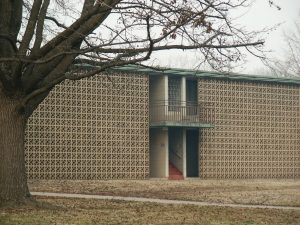 Carlson Terrace on the University of Arkansas campus in Fayetteville is one of only three buildings designed by Edward Durell Stone on the campus.  Stone was an internationally known architect and a leader of the Modern movement in architecture.  Carlson Terrace was built in three phases beginning in 1957.  The 300 unit Carlson Terrace complex embodies the aesthetic and economic values of the decade that Euro-modernism swept onto the American scene.  Grouped in sets of long, low blocks organized around generously planned courtyards, Carlson Terrace was designed to provide optimal dwelling function in minimal space.  For Arkansas GI bill students, Carlson Terrace offered fashionable and functional dwellings where, according to residents, a true sense of community blossomed.

Unfortunately, in the last thirty years, Carlson Terrace has slowly deteriorated into an undesirable housing location.  In June 2005, The University Board of Trustees unanimously voted to remove five of Carlson Terrace’s buildings and sanctioned the demolition of the entire complex.  The University of Arkansas has only two examples of world class modern architecture both designed by Stone, and Carlson Terrace is one of them.  The Board of Trustees has approved demolition of all remaining 15 units of Carlson Terrace, scheduled for the end of May 2007.  The structure was completely demolished in May 2007.