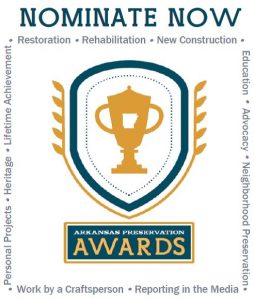 Nominations are currently being accepted for the 2022 Arkansas Preservation Awards.

Any individual, organization, business, or public agency is eligible for nomination. The project or activity for which the nomination is made must be located in Arkansas. Nominators may submit their own projects or may nominate others. With the exception of the Parker Westbrook Award, only projects or activities completed within the last three years will be eligible. Unsuccessful nominations may be revised and resubmitted during the eligibility period, but individuals or projects that have received awards will not be eligible to compete again in the same category based on the same work.

Outstanding Service in Neighborhood Preservation recognizes an activity or project that has made a significant contribu­tion to a historic area in Arkansas. Examples would include an effort to save a critical structure, creation of a revolving fund, or the establishment and maintenance of a neighborhood newsletter. If the nomination includes an achievement relat­ing specifically to a construction project, photographs must be included. If it is a tangible, non-construction project, such as a newsletter, a copy or representative issue must be included with the nomination.

Outstanding Work by a Craftsperson recognizes high-quality work that demonstrates an understanding of the principles and practice of preservation techniques on a specific project. It is not intended to reflect lifetime achievement. The nomina­tion must include photographs of the work and descriptions of the obstacles faced by the craftsperson in performing the work, innovative techniques or materials used in the project, and the process involved in the work, including research where applicable.

Excellence in Preservation through Rehabilitation– Eligible projects retain significant historic fabric but do not attempt to restore a structure to an earlier appearance. Nominations in this category should focus on how new materials and design were integrated with historic fabric to make the project successful.

Excellence in Preservation through Restoration– Eligible projects are those in which a primary goal was returning a structure to a documented earlier appearance. Nominations should focus on efforts to retain the integrity of the structure and must describe the process involved in achieving the result, including research, and solutions chosen to problems presented by modern mechanical intrusion, meeting code requirements, etc.

Outstanding Achievement in Adaptive Reuse recognizes projects that give historic buildings new life with modern materials. Nominations should focus on the use of innovative materials and methods, efforts to maximize energy efficiency, and the environmental and economic sustainability of the project due to its new use.

Excellence in Personal Projects recognizes the achievement of individuals in preserving, rehabilitating, or restoring structures for their own use. At the time of nomination, the project should be substantially complete. Nominations for this award should focus on the completed project, the process involved, and the owner/user’s specific efforts and contributions to the project.

Outstanding Achievement in Preservation Advocacy– Any entity is eligible for this award for having made a notable con­tribution to championing the cause of preservation. This award is intended to honor individuals (including public officials), publications, organizations, etc. that have had a strong impact on preservation through advocacy efforts.

Outstanding New Construction in a Historic Setting– Any contemporary building located within a historic context is eligible, including a major addition to a historic building. The project is expected to respect and complement the historic integrity of its setting. Nominations should focus on significant aspects of the historic setting and the manner in which the contemporary design acknowledges and complements them.

Outstanding Preservation Reporting in the Media is intended for professional television, radio, and newspaper reporters who present accurate, complete, and balanced accounts of a preservation project, problem, or issue.

The Ned Shank Award for Outstanding Preservation Publication combines excellence in writing with preservation achievement. It recognizes authors, editors, and publishers who write or create books or significant journal articles about preservation in Arkansas. Publications may document a particular preservation project, profile a person or group active in preservation, or discuss general preservation themes and issues.

Outstanding Achievement in Preservation Education recognizes any individual or entity that has made a significant con­tribution to the cause of historic preservation in Arkansas through education.

Excellence in Heritage Preservation recognizes communities or organizations that have proven their commitment to the preservation of their historic, cultural, and natural heritage: a greater knowledge of the nation’s past, strengthened regional identities and local pride, increased local participation in preserving cultural and natural heritage assets, and support for the economic vitality of our communities.

The Parker Westbrook Award for Lifetime Achievement recognizes significant individual achievement in historic preservation. It is Preserve Arkansas’s only award for achievement in preservation over a period of years. The award may be presented to an individual, organization, business, or public agency whose activity is of local, statewide, or regional importance.